Let’s take a look at what Tucson features for national investors. Tucson has the large investment properties to offer. The largest transactions in the past decade have generally comprised of apartments, resorts, regional malls, power centers, and student housing projects.

One of the largest investments occurring soon is the ‘gigabit’ service through CenturyLink. This is a fiber optic internet and data service that will begin on August 18, 2014. The service is aimed at small-to-medium-sized businesses and will initially be available at multi-tenant office buildings and surrounding areas. To name a few of the benefits of ‘gigabit’, the service allows for faster streaming, download speeds, and cloud services. This will likely attract new employers to the area given the advantage in communication and production of employees.

Another recent investment is the Tucson Airport, which has already broken ground on the new FAA Air Traffic Control Tower. The tower is a $42 million federal investment. The new tower will be twice as tall as the existing one and will also include a base building and adjacent solar farm.

The city has and will continue to reap benefits of the Regional Transportation Authority plan approved by Pima County voters in May of 2006. The roadway and transportation projects will occur over a 20-year span and cost taxpayers $2.1 billion. The project includes widening roadways, new overpasses, and the street-car. Many of the road widenings have already been completed as well as the street-car project, easing traffic commutes and improving quality of life for residents and employees.

Downtown Tucson is currently going through a renaissance. The downtown began revitalization when Unisource decided to build their headquarters there in 2010. Since then, the streetcar has been completed, and the 4th Avenue underpass had undergone a major redevelopment with new sidewalks, bike lanes, and driving lanes. New developments in downtown include student housing projects, restaurants and bars, and a shared office space. Furthermore, there are plans for new hotels, a grocery store, office buildings, retail, restaurants/bars, apartments and housing. The downtown has been and will continue to evolve over the next decade. 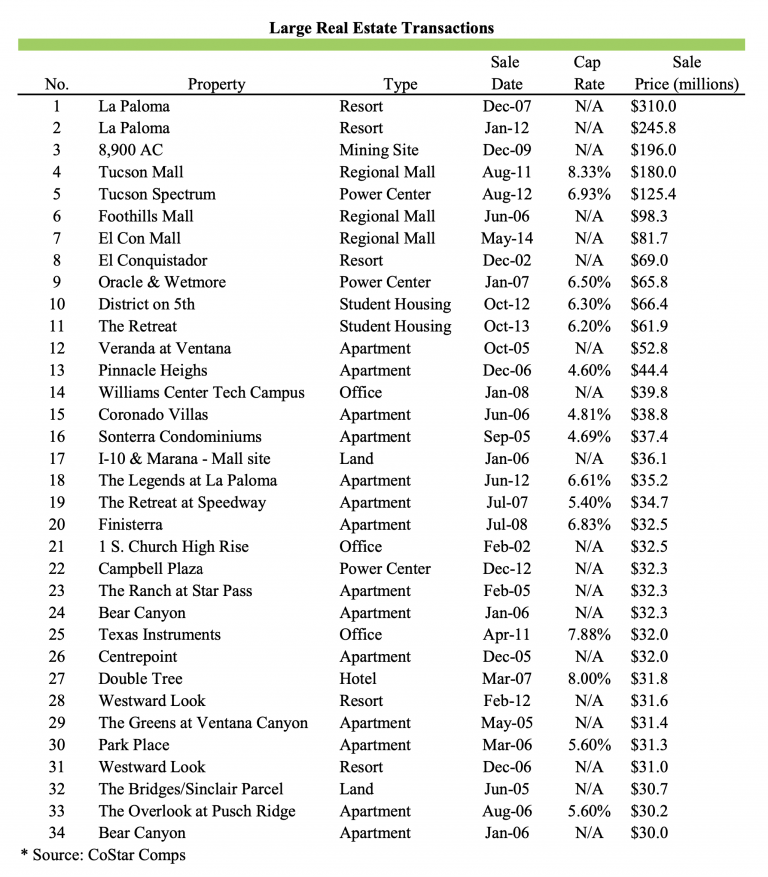 The resort/hotel market constitutes the largest dollar volume of the 34 sales, comprising of 31%, followed by 27% in the multi-family/student housing sector, and 25% in the retail sector. The land and office market are the smallest sections of the market at 11% and 5%, respectively. Below is a chart with a breakdown by property type. 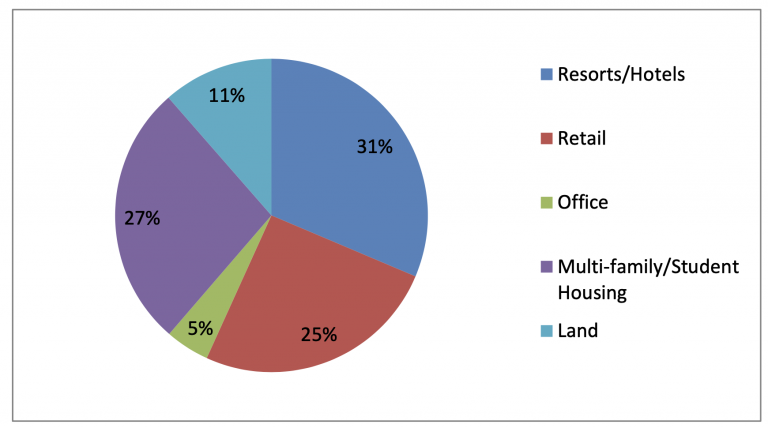 Next, let’s see how Tucson compares with other markets. On the following page is a table with the most populated metropolitan areas in the U.S. along with their population growth from 2000- 2010. Deriving a grade is largely subjective with some cities being more attractive than others from an investors stand point. For instance, cities that would be considered an ‘A’ market include New York City, Los Angeles, Chicago, Miami, and San Francisco. These cities have the infrastructure, a large population base, large workforce, and are attractive to national and international investors. There are many cities on the A/B fringe such as Philadelphia, Phoenix, Houston, Seattle, Dallas, and Atlanta. Investment grade ‘B’ cities include Indianapolis, Las Vegas, Oklahoma City, Portland, Austin, Denver, and San Diego. Investment grade ‘C’ cities is where Tucson would fall, as would Albuquerque, El Paso, Reno, Tampa Bay, and Raleigh. They are in this grade range since they have a smaller workforce base, smaller population, and are considered less attractive to national and international investors.

Davis-Monthan Airforce Base (DMAFB) is a mainstay of operations for the A-10 close-air support jet. The Airforce base will continue to operate and maintain the A-10 program through 2015. The F-35 Joint Strike Fighter is expected to replace the A-10 in the near future but not at DMAFB. This could displace many jobs directly and indirectly. This uncertainty could be a factor on whether or not to invest in Tucson or at least where to invest within the city. Areas such as the downtown or northwest will probably be less impacted since they are geographically further away from the base while east and south Tucson may be greatly impacted. Properties and businesses that will be most impacted are retailers and restaurants, apartments, residences, and land near the base.

Typically knowledgeable investors seek low-risk, stable assets with upside potential. Tucson is generally low-risk, stable, and has upside potential based on the revitalization of downtown and upgrading the infrastructure. If there was a queue of cities in line to ‘boom’ or at least attract larger investors and employers, Tucson would be near the top of the C category. Portland and Austin have recently undergone and are still undergoing a long period of revitalization and now it is Tucson’s turn. The politicians are becoming more cooperative and realize that growth is key to the quality of life and the success of the city.

Currently, Tucson as a whole is a lower grade investment but is improving and taking the right steps. As shown from the large real estate transactions, Tucson appeals to investment grade investors and is anticipated to do even better in the future as downtown flourishes, the airport and infrastructure improves, and Davis Monthan Airforce Base and Banner Health stabilize.