A Tale of Three Cities: Analysis and Comparison of Tucson – Albuquerque – El Paso 2014

The purpose of this report is to show the strengths and weaknesses of Tucson, Arizona and its sister cities, Albuquerque, New Mexico and El Paso, Texas. The three cities are sisters since they have many commonalities including climate, population size, and each city having a military base and a university. The stats and data shown herein are used to illustrate the bigger picture and may not reflect exact figures. 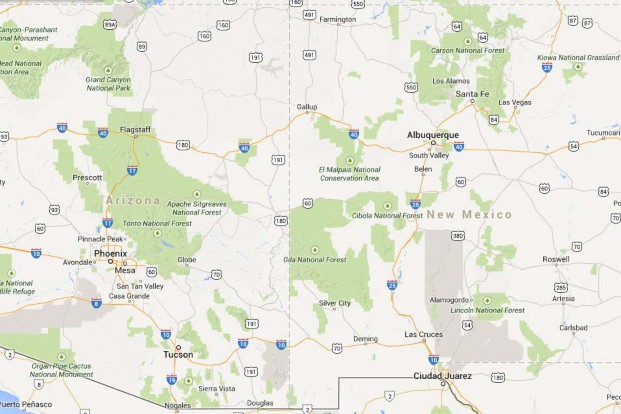 Tucson is about 60 miles north of the US-Mexico border and about 100 miles south of Phoenix, Arizona. The metropolitan population is about 1 million but the 2010 US Census Bureau reports a population of 520,000. Major industries in Tucson include Defense/Aerospace, Healthcare, and mining. Tucson does not have any major sporting teams beyond those associated with the University of Arizona. The current real estate trends include the build-up of downtown with new office buildings, street-car, student housing, restaurants, and retailers.

The major difference between Tucson and its sister cities is that it is in the shadow of a much larger city. The Phoenix metropolitan area is about 4 million people and has sports venues, a legitimate international airport, corporate industries, loop freeways, and a light rail line.

Albuquerque is the hub for New Mexico and has a rich culture. The city has a strong central downtown core, four seasons, and a minor league baseball team. Like Tucson, Albuquerque has a dated convention center known as Tingley Coliseum. Albuquerque is served by two interstates, also like Tucson.

Albuquerque has a new light rail line, traveling north-south through the city to Santa Fe, about 60 miles to the north. The light rail connects with the Albuquerque Airport, Belen to the south, and Santa Fe to the north. New retail and residential development is occurring on the west side of the city. The revitalization of downtown is continuing with a former train station being redeveloped into a mixed use project.

El Paso, Texas is about 300 miles south of Albuquerque and 300 miles east of Tucson. The metropolitan population of the city is about 830,000 and the 2010 US Census Bureau reports a population of about 650,000. Major industries in El Paso include manufacturing, cold storage, and call centers. The El Paso economy is largely based on how well and how safe Ciudad Juarez is at any time. El Paso also benefits from its vicinity to the border and despite its rowdy neighbor Juarez, El Paso is one of the safest cities in the United States.

Recent trends in El Paso include a new triple-A baseball team with a new ballpark downtown. The triple-A team was previously in Tucson. The new ballpark has spurred some new development downtown including two proposed hotels. The office and industrial markets are currently steady with a few projects under construction. The multi-family and retail markets are doing well around Fort Bliss, which recently received a large influx of personnel returning from missions. New single-family residential projects are at the lower end of the price range and are building on the existing finished lot inventory. Overall, the market appears to be steady and recovering slowly from the long recession.

The populations of the three metropolitan areas are similar. However, the 2010 census numbers are much lower. This is simply the result of city limit area. Tucson is 227 square miles,

Albuquerque is 190 square miles, and El Paso is 256 square miles. All three cities are spread out, accounting for the large difference in metropolitan population versus census figures. The population of each city is shown in the following table.

The populations of all three cities have grown by a sizable amount from 2000 to 2010. Albuquerque and El Paso have each grown by 22% or 2.2%, annualized while Tucson grew by a slightly less amount of 19% or 1.9% annualized. 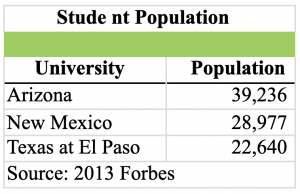 The three airports vary greatly in arrival/departure statistics. The main reason Albuquerque’s traffic volume is much higher is that the city is distant from surrounding metropolitan areas. Albuquerque also receives a greater amount of volume from tourists traveling to nearby cities in the northern part of state, including Santa Fe and Taos. Tucson posts smaller figures since it is close to Phoenix’s airport, which has more travel options and offers lower prices. The airport traffic statistics are shown in the following table.

Next, I will discuss the industrial, office, and retail markets for each city. This is important in illustrating each community’s strengths and where they can improve.

The industrial market is a good indication of manufacturing, production, distribution, and supply of a particular market. As shown in the table and graph below, El Paso has the largest industrial market. This is primarily due to the city’s location along the US-Mexico border. Albuquerque has the second largest industrial market. The reason for this is that the Albuquerque is distant from surrounding cities. Therefore, it is more desirable geographic location for the distribution hubs and supply centers in between larger cities in the western United States, such as Los Angeles, Denver, Phoenix, and Oklahoma City. Tucson has the smallest industrial market which is primarily due to Phoenix being 100 miles to the north with a larger population, airport, and vicinity to surrounding cities. 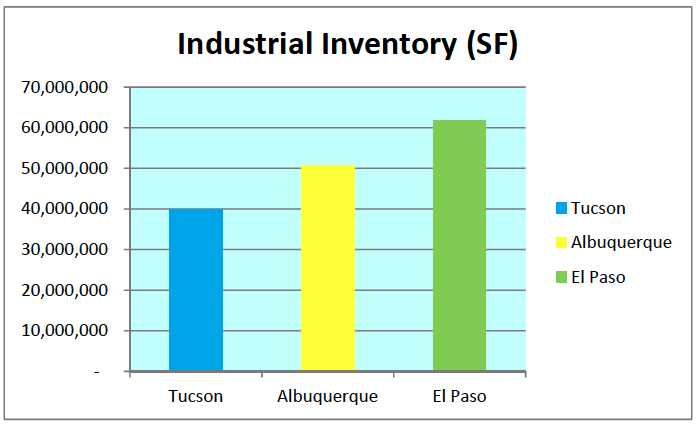 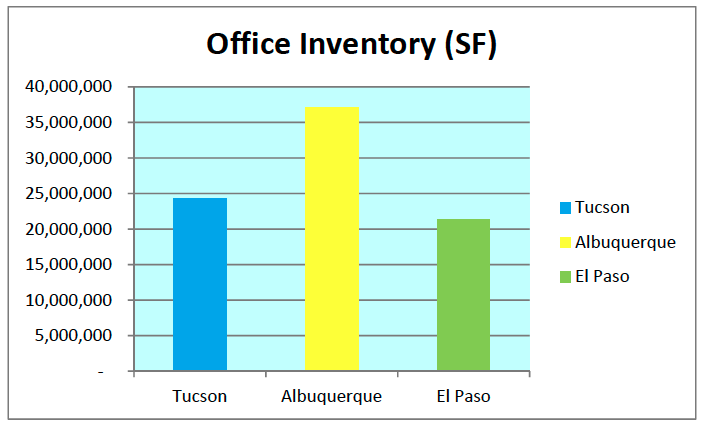 The retail market represents expenditure income, tourism, and also the contributions related to the retirement and student populations. It is noted that there is a large influx of shoppers from Mexico seeking higher end products and a ‘shopping experience’ in all three cities but primarily El Paso and Tucson. Albuquerque has the largest retail market of the three cities. Once again, this is due to Albuquerque serving as a hub for New Mexico. Tucson has a similar sized retail market and this is due to Tucson’s vicinity to the US-Mexico border, and large retirement and student populations. El Paso has a smaller but similar sized retail market, this is due to El Paso’s vicinity to the US-Mexico border. 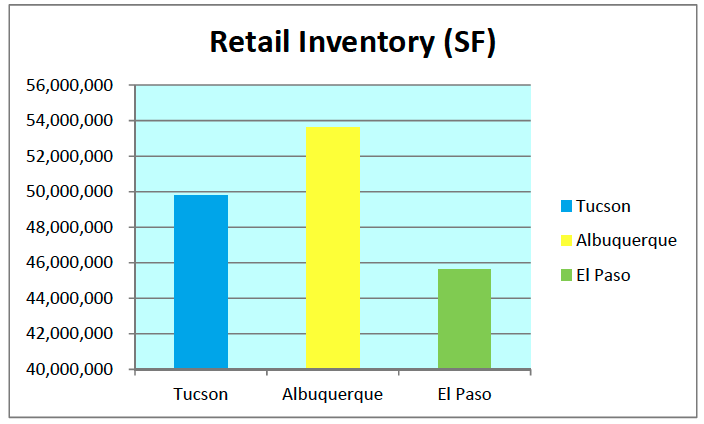 The three cities serve a similar demographic population, with military personnel, students, and retirees. The communities are similar in size and unsurprisingly have a similar sized industrial, office, and retail markets. The markets are considered to be in a period of slow but steady growth. By statistic figures, Albuquerque appears to be in the best position and has capitalized on its strengths. El Paso has capitalized upon its location along the US-Mexico border and is well positioned in the market. Tucson has the most potential for growth with a large population base and student population but suffers from being in the shadow of a larger city.

Tucson has done a good job of catering to the university market. Because Tucson is the largest of the three cities and has the largest university of the three cities, it has the potential for a more educated community. Tucson benefits from its vicinity to the border, and could benefit from its vicinity to Phoenix. Tucson could serve as a warehousing market for Phoenix companies or offer minor league sports and training programs to support the professional teams in Phoenix. Tucson could do a better job of catering to industry and collaborating with Phoenix. Tucson could offer tax incentives, political cooperation, and improved infrastructure to cater to existing and potential employers.

El Paso appears to have captured the US-Mexico border business such as cold storage and retail, while catering to large manufacturers and call centers to grow local jobs. The city’s safety is also appealing for growth and existing citizens.

Albuquerque has exploited their strengths by supporting employers. This has resulted in the creation of science and technology jobs, and building a stronger downtown core.

The three sister cities may already be in the process of following these recommendations but there is no harm in repeating them. The cities could coordinate with one another and build alliances to serve a network for manufacturing and distribution. In order for a city to be appealing, the fundamentals come into play. This includes having a safe and clean place to live, good education, and strong youth programs. A legislation and political system that is cooperative with the community and surrounding communities is also key for all three cities.

The cities could also have major water issues going into the future so this could be an opportunity for the cities to team up. The cities will likely be reusing (not recharging) their water in the near future so the sooner the infrastructure is in place, the better. Another option would be to pipe in water from an area with a surplus of water. The cities could invest on a pipeline structure together.

Lastly, these sister cities could offer better infrastructure. The core in each city would benefit from underground electricity lines, public transit systems and nicer roads. By building and expanding their fiber optic and wi-fi networks, the overall value of the city would increase. Most cities typically have an area where government offices are centrally located and another area where corporate employers are located. As such, both areas would benefit from such services. This type of infrastructure is required by most corporate employers before locating to a city. Therefore, these cities would be more appealing to employers to relocate.

The purpose of this analysis is to show the strengths and weaknesses of the three cities. The primary goal is to help achieve an improved quality of life for each. The secondary goal is to have a long-term sustainable future and to grow demand in the region. Growth is typically perceived as a positive thing. However, growing smart with a long-term plan serves a greater purpose and provides even greater benefits to a region. 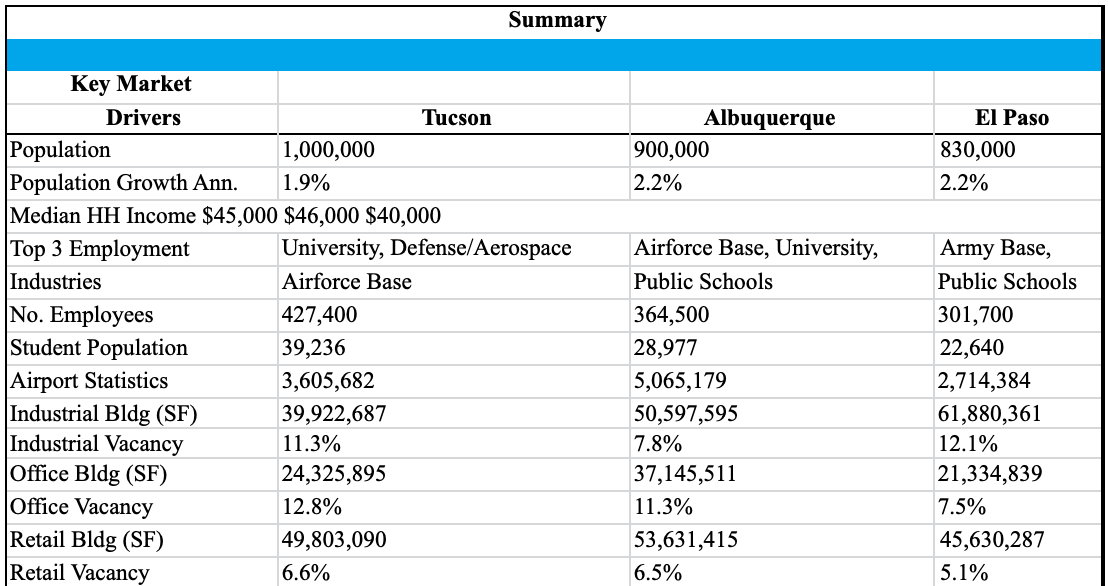