Some social trends related to restaurants as noted by NRA include:

In the State of Arizona restaurants account for $11.5 billion in annual sales. There were 9,176 restaurants in the state in 2014 and 282,700 jobs were provided in the industry in 2016 (Arizona Restaurant Association).

Interestingly, northern or Snow Belt cities (New York and Chicago) have had declines in the number of restaurants while the cities in the Sun Belt have experienced increases. 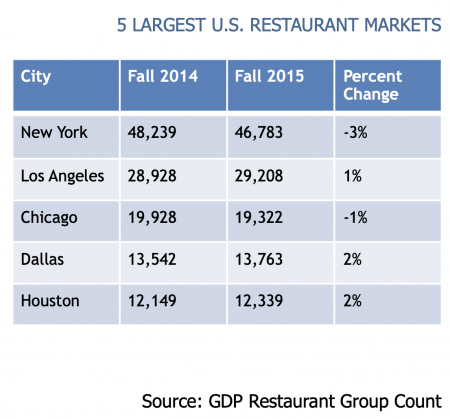 History and Overview
Buffalo Wild Wings has made a significant investment in Arizona, with 21 stores in the state. Of these, 3 are located in Tucson. Buffalo Wild Wings started in 1982 near Ohio State University. The company offered its first franchise operation in 1991 and went public in 2003. It has now grown to nearly 1,200 company owned and franchised stores. Of these 596 are owned and 576 are franchised. The two main concepts are wings and a sports bar environ- ment. In fact, wing sales account for 42% of total revenue. Alcohol sales account for 20% of gross revenue. Each newly opened store provides over 60 flat screen and projection televisions. The company has 44,500 employees. Almost all of their restaurants are in the United States with 14 in Cana- da, 10 in Mexico, and the rest in Asia or the Middle East.

Financial Results
Revenue for company operated stores and net income from all operations are noted in the table below and to the left.

Company growth has occurred almost exclusively through new store openings although revenue per store for company owned stores increased by 4.2% in 2015. As noted, there has been consistent net income ranging from 5.2% to 6.2%. Other key operating statistics include: 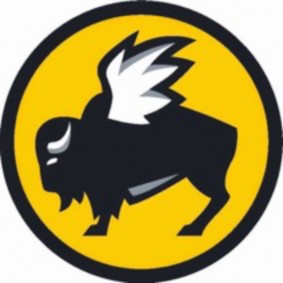 Tucson price trend information for the five year period from 2011 through 2015 is provided in the table to the left. This pricing is for all restaurants, fast food, casual, fine dining, and other concepts. The data for the years 2011 through 2013 is not statistically significant as the city’s economy was recovering from the economic collapse of the mid and late 2000s. Information for 2014 and 2015 is more relevant and is consistent with research and appraisal work conducted by AM Valuation Services, PLLC, in the Tucson area. There were 25 sales during 2014 and 40 sales reported for 2015. The other averages for the period with regard to price and cap rate indicate that the market may be experiencing moderate upward pressure on values. The average price increased from $210.11 psf in 2014 to $228.29 psf in 2015. The average cap rate declined during the same time period from 7.0% in 2014 to 6.2% in 2015. 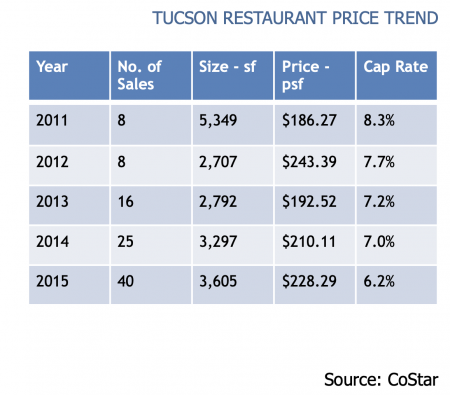 The City’s economy and real estate markets have been in gradual recovery for several quarters. Cushman & Wakefield / PICOR (PICOR) reports that 136,000 sf of retail space was under construction Tucson as of first quarter 2015. Also as of first quarter, PICOR reports that the retail vacancy rate in Tucson was 6.7%. Restaurant construction is a significant part of new real estate activity, whether considering leasing, sales, or new construction. New construction city-wide is detailed to the left for restaurant properties.

In the industry overview provided earlier it is noted that the national chains are expanding while independent operators are contracting slightly. This is clearly evident in the Tucson construction activity as 8 of the 10 companies noted are franchise or corporate operations. The two exceptions are Casa Valencia and Blake’s Lotaburger. Blake’s is a New Mex- ico based chain with 77 stores that is expanding into Texas and Arizona. Casa Valencia is a local restaurant. Two inter- esting anecdotes relative to the projects noted above in- clude: 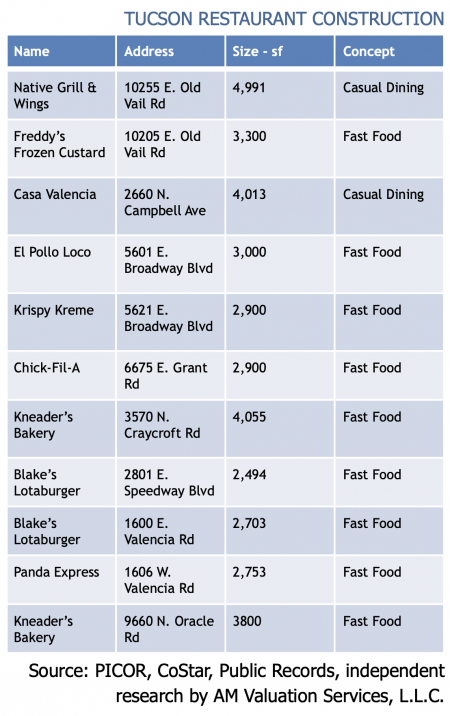 Tucson has many niche retail areas with concentrations of restaurants. The La Encantada shopping center in the Foothills is probably the best retail destination point in Tuc- son. It is located at the north-end of Campbell Avenue at Skyline Drive. It is an open or outdoor center that has dra- matic views of the Tucson valley and the Catalina Mountains. Nearby housing prices are among the highest in Tucson. Due to these characteristics La Encantada has several dining concepts. There are other food service concepts including Savaya Coffee, AJ’s, Frost Gellato, and Teavana. Only the full service facilities are reviewed here.

North occupies a freestanding pad and has dramatic city and mountain views with patio seating and a full-service bar. Firebirds also occupies a pad site but the views are not as dramatic. There is also a full-service bar at Firebirds. Hum- ble Pie occupies a rear space but has city views and also provides a full service bar. RA Sushi is in an end unit and has somewhat limited views. Blanco occupies a patio oriented space and like North has dramatic views with a full service bar that opens-up onto its patio. Each of these concepts occupies well-appointed space with significant and unique tenant improvements. AJ’s (Purveyor of Fine Foods), it should be noted, fits in well with these dining concepts as this upscale grocery chain provides 5 limited service dining concepts. These include a Sushi bar, brick-oven pizzas, sandwiches and wraps, a bistro, and a bakery. These are primarily carry-out services but there is onsite patio seating as well as limited seating at the Sushi bar.

The restaurant market has been more active than in years past. In addition, banks have been more willing to lend on restaurants. Here follows a list of some recently analyzed restaurants. 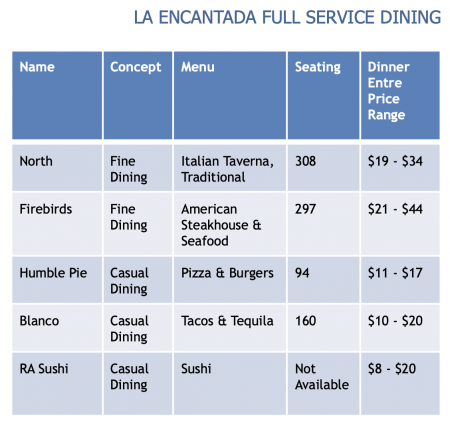 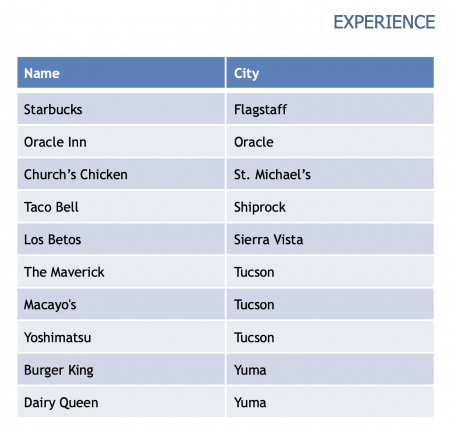