Water will be an on-going issue in the Southwest U.S. in the foreseeable future. CAP water levels rise and fall but the trend has been a steady decrease over the past few decades. As glacial ice caps melt in the Rocky Mountains, there will be even less water going into the Colorado River going forward. Even slight temperature rises can amount to a higher rate of evaporation. The good news is that there is time and we have the technological advancements to fix these issues. In addition, Arizona, California and the other southwestern states have been proactive about conserving water. This article will focus on Arizona’s water issues.

To get a better idea, water usage is broken down into three categories: municipal at 21%, agriculture at 74%, and industrial at 5%. Reducing agriculture usage seems like the most feasible way to reduce water usage, but at what economic cost? Three of the five C’s of Arizona are agriculture related; citrus, cotton, and cattle.

Using less by residences is one way to conserve water. However, there are other ways to save water, such as water harvesting, using native desert landscaping, minimizing leaks, city/county planning, and increasing rates.

According to an article in the Wall Street Journal, dated June 21, 2016. The nations utilities lose

$2.6 billion to water-main breaks with about 240k water-main breaks annually. Maintaining water lines is not sexy, but is any effective and easy way to conserve water. Given the current technology, we can have automatic alert systems and shutoffs for a pipeline that is showing excessive water use.

Charging more for water is an easy way to reduce municipal water usage, about 21% of the state’s distribution. The City of Tucson has a tiered water system that charges a greater amount per gallon for the higher usage. This is a great system to reduce wasting water. It also encourages using reclaimed water for large water users, such as golf courses, car washes, and apartments with grass and lush landscaping. It also encourages apartments and large estates to move towards using native desert landscaping. Typically, agriculture and industrial uses have their own wells and water systems, so this does not impact them as much.

City/county planning is a slippery slope because you are effectively controlling how people use their land. As mentioned, agriculture uses consume about 74% of the water supply.

Therefore, agriculture is an easy target from an academic standpoint. In reality, agriculture is a big part of Arizona’s culture and economy. As previously mentioned, three of five of Arizona’s C’s are agriculture related; citrus, cattle, and cotton. There are tax laws in Arizona that assist the farm and cattle business, that are both struggling from tariffs, COVID-19, and a tough business climate in general. Not all are struggling and some have yet to see benefits from the new USMCA trade deal. Changing tax laws can have huge consequences and could hurt already struggling industries even more. Asking conventional farms to convert to hydroponics is a difficult task that requires a huge amount of capital that most farmers do not have and requires a significant learning curve. There are hydroponic crops in Arizona, some related to tomatoes, lettuce, peppers, and the marijuana industry. Encouraging more hydroponic crops in Arizona is a good idea, I’m not sure how this can be done, but hydroponic farms use as little as 10% of the water of conventional farms.

Water harvesting is another feasible option. Directing water into the nearest drainage area from development is a fast way to lose a valuable resource. This water can be collected from rooftops, driveways, roads, and collected into tanks/cisterns or redirected into adjacent landscape areas. Saving water from rainfall can be used to water plants during dry times. Water harvesting can also be used for farming, ranching, and uses much less water than a traditional farm by utilizing the natural terrain and waterflow in the area. Homes can also be outfitted with a grey water system to reuse some wastewater that can be used for gardens and outdoor landscaping. When using grey water, one has to be conscious of the soaps, detergents, and shampoos used, ensuring that they are not harmful to the plants and animals. Building construction could utilize several other environmental techniques such as directing homes so that they receive optimal natural light from the sun, solar panels, using exsulation and more insulation on the homes. Exsulation is used to cover windows and other susceptible parts of the home to block the heat or cold before it’s inside the home. Home owners and builders could also use environmental friendlier materials such as adobe, straw bale, hempcrete, ashcrete, recycled materials, bamboo, etcetera.

For municipal use, it would be great to see a direct potable reuse system (toilet to tap) for municipalities around the state. This reuses the water much more efficiently than recharging the water, which loses water to evaporation and thirsty plants. This type of technology takes treated sewage water and uses reverse osmosis to bring the water to potable quality. This is already being done in Wichita Falls and Big Spring, Texas. Several cities around Arizona are also heavily considering DPRS such as Flagstaff, Scottsdale, and Tucson. Los Angeles and other cities in the southwest are also considering moving to DPRS as water becomes scarcer. This type of water system requires capital costs, but is an easy way to preserve drinkable water.

Forget the Wall, Build the Pipe

For more drastic measures, there have been several ideas brought forth. There can be a large water pipeline system from the Mississippi River to Lake Mead. This would be a gargantuan task; acquiring right-of-way, getting states to agree on the capital cost, agreeing on allocation, not to mention the actual construction of thousands of miles of pipeline through varying topography. This would effectively relocate water from an area that has a large surplus of unneeded fresh water

to a part of the country that desperately needs the water. This project would take several years and cost a significant amount. In addition, there is a concern that we could become more careless with a new source of water, and would be less concerned with conservation. There are other similar ideas of bringing water from the Mississippi River straight to California, a pipeline from the Columbia River down to the southwest, towing icebergs to California, and building desalination plants in California and Mexico. An idea that might be more feasible is to transport freshwater on railcars. Currently, oil is transported by pipeline and rail, so this idea is not so farfetched. All are costly ideas, but might be useful as water becomes a more valuable commodity in the future. It is best to plan now, before times get tough. 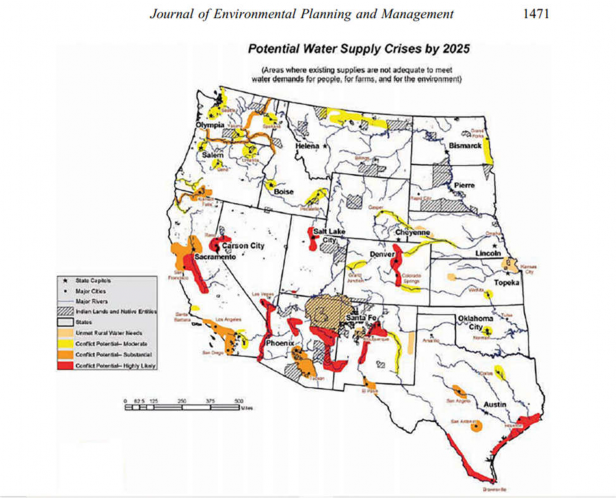