Amazon recently opened a fulfillment center in the Port of Tucson. This will have both positive and negative impacts on the local economy. Ship times will be reduced and about 1,500 jobs will be directly created, but does this come at a cost? For initial insight, we analyzed a report in Economic Policy Institute titled Unfulfilled Promises prepared by Janelle Jones and Ben Zipperer on February 1, 2018. According to this report, the warehousing jobs increase but overall there is no noticeable difference in net jobs. This is largely due to lost jobs in the retail industry. This brings us to the next question, which retailers and businesses will be the most impacted?

Articles referring to more specific metropolitan areas such as San Bernadino and Cleveland report mixed feelings on Amazon fulfillment centers. Both metropolitan areas welcome the new jobs, nearby fast food restaurants saw increased business, and an old mall was repurposed into a warehouse in Cleveland. In both scenarios, Amazon made their presence known by reviving a previously declining area, filling old warehouses and a shopping mall that was vacant. The downside is that most jobs are low paying and/or seasonal, and there is a decline in existing retailers.

The most obvious retailers that will not be impacted are gyms, medical or entertainment related, auto repair facilities, and restaurants. Next, we looked at Amazon’s top sellers, which are mostly tech or electronics related, like Alexa, Fire HD tablet, Bluetooth sound buds, robot vacuums, and memory cards. This would suggest that stores that sell electronics will be vulnerable like BestBuy, Office Depot, OfficeMax, and Conn’s Home Plus. However, most of these companies, like Amazon provide short delivery times.

Our research suggests that several other industries will be impacted by new fulfillment centers. Department and Big Box stores are the most susceptible, especially those that were late to adapt to short shipping times and online orders. Some examples of Big Box Stores that will be impacted by a new fulfillment center include Macy’s, JC Penny, Barnes & Noble, Costco, Target, and Walmart. Warren Buffet believes department stores are the low hanging fruit, his specific words were, “the department store is online now”. This makes sense as both Amazon and department stores sell all types of goods.

Other industries that will be impacted include pharmacies, shipping companies, and local businesses. The pharmacy business will be impacted since Amazon can deliver medications since it purchased PillPack in mid-2018. In addition, shipping companies such as FedEx and UPS will also be impacted, as Amazon will ship goods on their own. In Tucson, some local businesses come to mind, but they have loyal followings and their shoppers are less likely to order online, this includes businesses such as Casa Video, Bookman’s, musical instrument stores, and Zia Records.

These businesses have also adapted long ago, Bookman’s has events on most evenings, Casa Video has a bar, and most have downsized quite a bit in the past several years and also sell on-line.

In conclusion, the retail industry is constantly changing and retailers have to adapt quicker now than they did in the past. There will be casualties with a new Amazon fulfillment center but our research indicates that it will be gradual and undramatic. There might not be noticeable job gains but overall will be a benefit to the region. A new Amazon fulfillment center will ultimately benefit the city with jobs, but some might just be a shift from retail. The consumer will also benefit with the increased convenience. 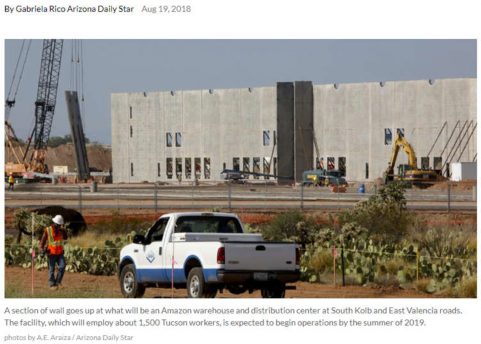